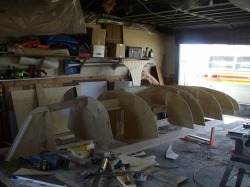 After lofting my drawings I cut the bulkheads and installed them on a "strongback" I think its called. As I own only basic hand tools and a table saw, the bow that should be a substantial piece of lumber is a piece of plywood, this decision would haunt me later. Otherwise the proportions translated well from paper to wood. Marine plywood is so much more expensive than the 1/2" construction grade I used. Though with 8 bulkheads none should be heavily stressed.

Once the bulkheads were rigidly mounted in place I used 2x4 lumber cut down to aprox. 5/16 and planked the hull. Epoxy and brad nails did the trick. It is amazing how much bend you can achive. Each plank was epoxied to each other as the next row went on. A triple thick layer went on the first row. 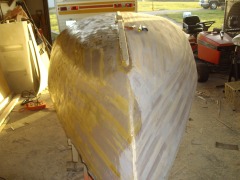 Once the hull was complete, it was faired, and covered in a polyester cloth and wetted out with epoxy. The cloth is much easier to work with than glass fiber, doesn't itch, and has better abrasion resistance than glass. The cloth was easy to work with but soaked up a ton of epoxy. The wood running fore aft on the bottom is there to hopefully add some directional stability like in a canoe. It probably won't do a damn thing but its 1/2" thick so at least it will take a shitkicking and help protect the hull. 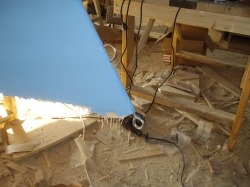 Got lazy with the camara for a while. This is the bow with light blue primer. Under it is a piece that I had a local fab shop do up for me. Stainless steel 16" long was bent around on an angle to match the bow. The eye hook welded inside it is for the forestay (which is probably wrong) and the other loop is the hook to winch it up to a trailer (also probably wrong). 10 3" screws, a bed of epoxy, covered in cloth and epoxy says that this isn't going anywhere. This to compensate for the lack of strength on initial construction. Had I used a heavy piece of timber for the bow in the first place this would have been avoided.

Here she is painted in her final colour and sitting right side up for the first time. The cradle I made out of scraps is a total piece of crap and already collapsed once. The boat bounces real good though. The white patch on the stern will be cut out with much of the rest of it. The floor is above the waterline (maybe) so by cutting a scoop in it it will make the cockpit self bailing (or self filling I guess). Very pretty lines on her. 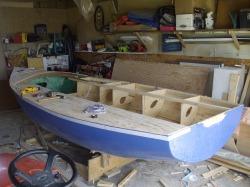 Had to modify the bow as the 3/8 good one side plywood would not bend to the curve I had originally envisioned. While recutting the bulkheads I decided to change the whole arrangement. Originally the mast would come up through the bow but now it is set just forward of the mast. The holes in the bulkheads I call speed holes cuz they will make it lighter and faster. Naw, actually they are for airflow, I dont like the idea of anything being completly sealed up with no ventilation. 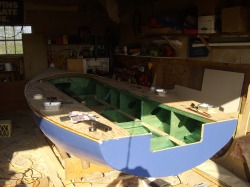 The cockpit is coming together. Every surface will be either painted or covered in wood preservative. In the event that it does sail well I want to be able to enjoy it for along time. I particularly like the transition from the bow to the cockpit. The stringers on the floor are to add some support to the sole. The cut out of the stern is big enough to let the cockpit drain quickly but still leave enough material to mount the rudder and motor. 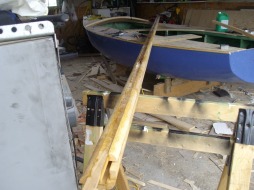 The mast is starting to come together. It consists of 10 pieces of wood. 11/16 1/4 round pine at each corner, approx. 1 x 5/8 spruce in between.The aft side has the spruce spacer recessed further into the mast to allow mahogany cove molding inverted to act as the sail track (detail below). Never underestimate the room required for a complex assembly. Trying to piece a 20 foot mast together in a 20 x 20 crowded garage and trying to keep it perfectly straight was/is a real treat. I was very concerned about the sail binding in this track but ran it up and down today and it slides nice and easy, by hand anyway. 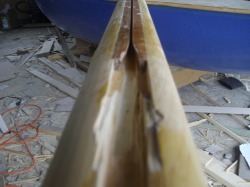 Detail on the mast. Made a mistake at the base of the track and had to cut the groove further down so it is a tad ugly. You can see the groove cut into the wood with the inverted cove molding overtop. The boom will be solid spruce but haven't yet figured out how to mount it. 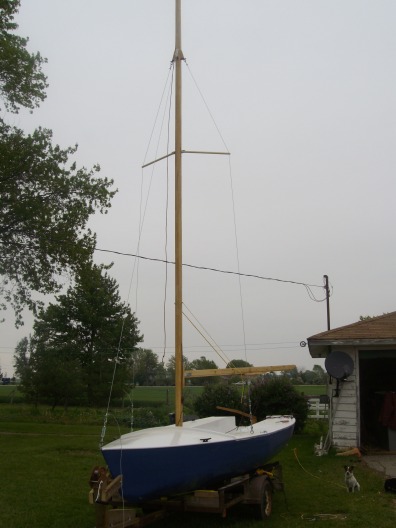 Almost done. Installed the standing rigging and a mock up with the boom to figure out the running rigging. Using a 4 : 1 ratio on the boom and boom vang. Could probably get away with less but I want my wife and son to be able to control everything without fear of getting knocked out. The mast looks nice and straight, a small miracle all things considered. The trailer is an old utility trailer that has been converted in a most brutal way, nasty as hell but should do the trick. Can't wait. 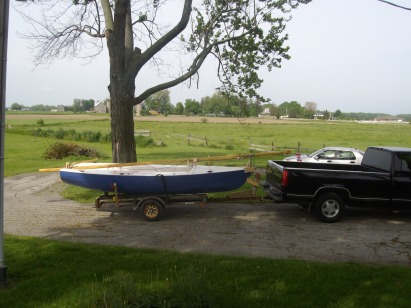 Here she is already to go. The mast is laying in three little cradles that fit onto the boat. The trailer is a bit small to the boat nearly touches the back of the truck, but it tows beautifully.

We decided to go to Fanshawe Lake (very small man made lake near London Ontario) instead of Lake Erie to avoid the swells that would come on a large lake and to have the calmer air further inland.

The used mainsail that I bought came with 5 battons but the sail only had three pockets and as it turned out only one of the five actually fit so had to cut down 2 others. Once fully rigged I backed her into the water and she not only floated but did so right side up. Despite no ballast and a heavy mast it was very stable, amazingly so. The waterline was exactly where I had hoped.

How'd she sail? It was awesome!!! It was scary, exciting, exhausting and exhilarating. We left the dock on a dead run and did several tacks to get back. The wind indicator broke while stepping the mast (little Canadian flag) and the lake is narrow with high trees all around. The wind was blustery and wind direction unpredictable. Even so when we did get it all right we could feel the boat surge forward (we may have done close to 4 knots at times) and at times nearly buried the gunwale. It was incredible.

Perfect, not quite. The tiller was too long and I had to sit so far forward I was crowding my wife and son more than I should have. Have now cut 7 inches off and will remove a few more if needed. I was afraid that the rudder was too small but it turned very well with little input from the tiller. The dagger board was a very tight fit I had to hammer it down into place. Have sanded and re-epoxied the high spots. The boom was on a 4:1 purchase and was far too easy to pull in and made a mile of tangled rope when the boom was pulled in, have changed it over to a 3:1.

I am thrilled with the over all result. Will post some pictures of it on the water next time when we all won't be too scared to operate the camara. 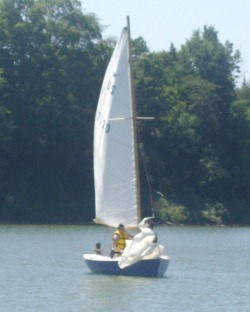 Here we are on the water, mainsail up raising the jib. Very frustrating winds again. Would blow lightly, die and then change direction for 10 sec. or so then die again. Never really had a consistant breeze to play in. The small trolling motor (32 lbs ot thrust) moves it well, at paddling speed on 3 and a good walking clip on 5 (max). The battery under the sole did seem to provide some extra stability as I had hoped. Still need to remove more of the tiller as it is still too long. The 3:1 on the boom seems just about right. So thats it, no more to tell. Am very happy with the boat, I seemed to have done enough things right to make her as stable and forgiving as possible. If I do end up getting a decent job next year we will get her a new aluminum mast, that should improve the stability much more and eliminate the fear of braking the mast even though it is probably way overbuilt.